Finding the right introductory Traeger grill can be challenging. Today we are going to compare and review two popular grills: the Silverton 620 and the Pro 575 to decide which one is our favorite.

Both grills have many of the same great features that make Traeger such a popular brand for pellet grills.

Traeger WiFIRE technology connects to your phone, allowing you to control the temperature of your pellet grill from wherever you are. This is a great feature when the smoke times are 10 – 12 hours. Need to run errands? No problem.

Another great feature of both the Traeger Silverton 620 and the Pro 575 is the digital meat probe. Put this thermometer in your meat while it cooks to be able to check the internal temperature without opening the lid!

Both these pellet grills also have versatility. With temperature ranges of 180 to 500 F (if you get the Gen2 Pro 575 or any Silverton model) grill, smoke, bake, roast, braise and barbeque with just one grill.

Both grills come with two easy-to-clean porcelain grills and locking caster wheels. Both grills use pure hardwood pellets and need electricity to run.

Since the Silverton 620 and Pro 575 are both considered introductory grills, they do not have all the features of more expensive models.

For example, neither of them has the Super Smoke Function or double-wall insulation seen in other Traeger models. When your grill is running low on pellets, neither of these models includes a pellet sensor to alert you without an upgrade.

The Traeger Silverton 620 has 624 square inches of grilling space with 363 square inches on the bottom, and a secondary cooking grate that is 257 square inches. The pellet hopper can hold 20 pounds, making it big enough to last a full smoke session in most cases.

For those of us who are clumsy or have young kids or pets, the internal grease management system of the Silverton 620 is a huge benefit. Excess grease from the grill is channeled from the front of the grill to a trough that empties into an internal grease trap, which is built at the bottom of the barrel. This means there is no external grease bucket to run into while you are cooking.

The Silverton 620’s downdraft system comes with mixed reviews but gives it the same ventilation system as more expensive models. The way this system works is old smoke is forced down below the grill and out the back while new smoke produced by the firepot is pushed into the grill.

The Silverton 620 is available exclusively at Costco. Reviewers love that Costco has a generous no-questions-asked return policy, but a few wonder if grills at Costco have a few more mechanical problems than those bought directly from, say, Traeger.

The Traeger Pro 575 is the most popular pellet grill in the world and has some great new updates in its 2nd generation model. These features are the same in the Silverton 620, but different from Pros purchased before 2019.

The new D2 control panel is all digital, which means you have greater control over the motor and induction fan, with faster start-up speeds. The Gen 2 models can also get to temperatures of 500 F – a good searing temperature – whereas the older model got to 450 F.

The total cooking space of the Pro 575 is 575 square inches with a primary cooking grate of 418 square inches, making it larger than the 620, but its smaller secondary grate is only 154 square inches. Since both models are pellet grills it does not make a difference whether you use the primary or secondary grates in terms of temperature and cooking times.

The pellet hopper capacity of the Pro 575 is 18 pounds, which means that you can almost fit a whole 20-lb bag of pellets at a time, but you will still have some leftover. It is big enough that for most recipes, you won’t have to refill during cooking times.

The 575 does not include a worktable or storage space. You can purchase both as an upgrade. The worktable is pretty small, which means you may need to use a secondary worktable anyway, although the storage space can be useful.

Another drawback to the Pro 575 is it does not come with a cover for protection. Buying a cover will keep your pellet grill working for years to come, but it is an additional expense.

It also comes with only two back wheels. At 128 pounds, this does not make it easy to move anywhere but a very short distance.

The Pro 575 has an external grease management system. This means that the grease is channelled from the middle of the grill to the left side where it goes through the spout into a hanging grease bucket on the left side.

The Pro 575’s outlet vent is top-mounted, making the smoke go up and out. Many reviewers prefer a chimney-like ventilation system attesting that it has better airflow than pellet grills without, but others say that it is just for aesthetics.

Pellet grills use a forced-air design and a fan to circulate smoke and heat to cook your food. The smokestack feature allows old smoke to leave and provides airflow that creates a pull that makes the smoke pass over the food before exiting through the chimney.

We’ve compiled a list of the main differences between the Traeger Silverton 620 and Pro 575 in order of what we think is the least important to most important to consider.

Before we reveal our top pick for an introductory Traeger pellet grill, let us answer some common questions.

The Silverton 620 is bigger, cheaper, and comes with more bells and whistles than the Pro 575.

Both have great features of the Traeger Grills such as WiFi-controlled settings, digital meat probes, and a 3-year warranty.

The Silverton 620’s inclusion of a cover, worktable, and storage makes it significantly cheaper than the Pro 575.

The downside of the Silverton 620 is how you can only buy it at Costco and may need to test out whether it does heat evenly, but with Costco’s generous return policy you have nothing to lose.

But for us the final decision came down to the cooking…

We found the results from the trusty Traeger Pro 575 produced superior meat – from simple burgers through to long, slow pork shoulders the 575 produced better flavour profiles every time and we can’t go past it. 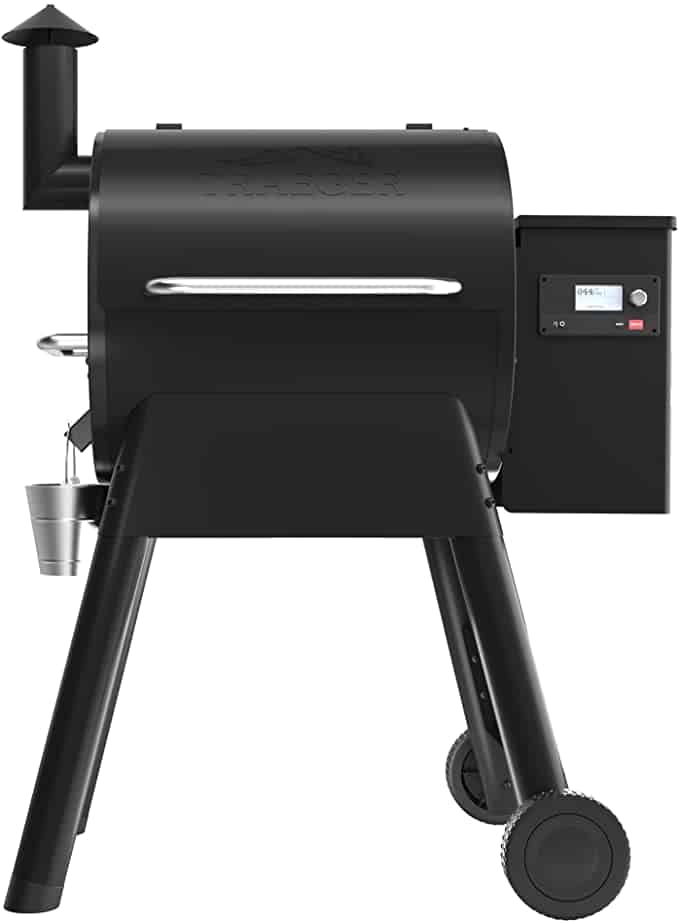 Both the Silverton 620 and the Pro 575 have a 3-year warranty from Traeger Grills.

For the Silverton 620 bought at Costco, you can enjoy one of the most generous return policies. If you are not completely happy with your purchase you can return the Silverton 620 at any time for a full refund.

The return policy for the Pro 575 depends on the store you buy it from.