With all the bike racks available, it can be difficult picking the right one.

And with your bikes possibly being one of your biggest investments the pressure is on.

The wrong or cheap bike rack comes at a high cost when you travel a lot or when you’re driving at high speeds.

There’s a possibility that they won’t hold up and your bike may go flying off the back of your car while on the highway.

You don’t want that and neither do we. So that’s why we’re comparing two popular bike racks the Thule Sidearm versus the Frontloader.

We want to help you get on the road faster without having to wade through all the different choices.

How Easy Is Installation?

The Thule system is manufactured from aluminum for a solid feel and structure. There’s no need to worry about corrosion or rust breaking the bike rack down anytime soon.

The actual assembly of the Thule system can be difficult and the instructions can be overwhelming to follow. Because of that, we recommend following a detailed YouTube video.

The good thing is that every piece you need is included in the package.

Expect to spend no less than 30 minutes on this project.

Once assembled, the Thule can be mounted to your vehicle by using clamps on the underside of the rack system and by tightening the bolts into place. 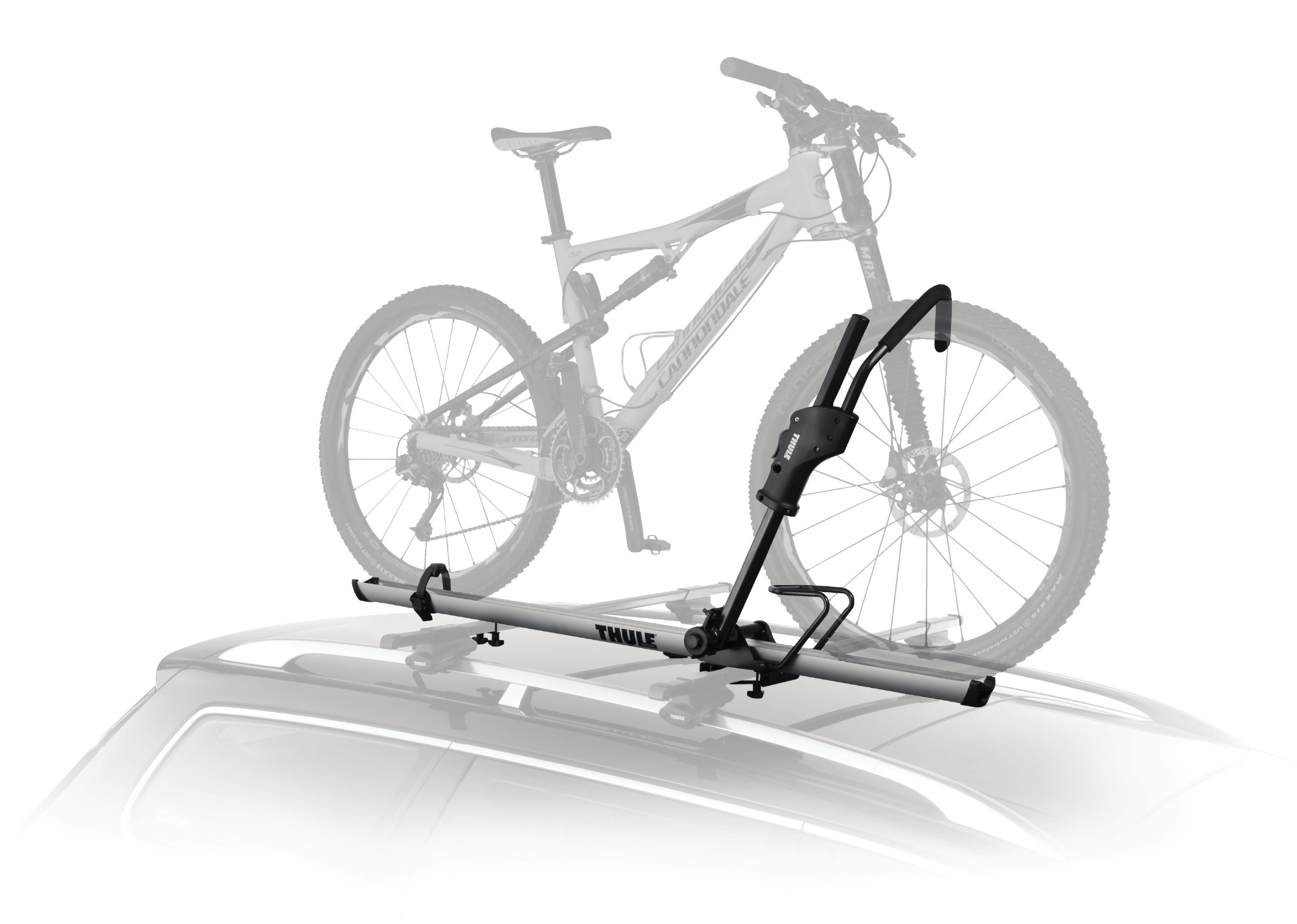 The ratcheting arm can then be lifted up to place the bike onto the rack making sure that the wheels are in the wheel tray.

The front ratcheting arm can then be maneuvered to secure over the front wheel just ahead of the brake caliber (make sure the arm is snug against the wheel).

With it secure and held in place, you can now use the back ratcheting strap to secure the rear wheel in place.

That’s it for the Thule.

The Frontloader is practically ready to go straight out of the box.

Place the rack system onto your car’s roof rack system and then lock the pin for the bike rack into place by sliding it forward and then tightening the bolts for both the front and back. 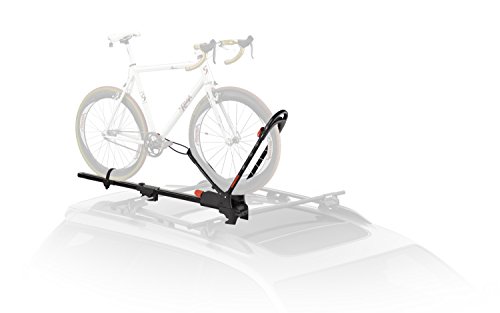 Both wheel braces up front can be adjusted and we recommend extending the front up as high as it will go so that when you roll your bike into the rack, you can just slide it down till it’s snug with your tire.

The bottom ratchet that rests behind the front wheel should lay flat until you’ve got your bike where it needs to be and then you’ll push that one up so it rests securely behind the wheel.

The tension can be adjusted with the little knob on the bottom of that specific arm- so make sure it’s tight.

The rear ratchet strap goes through the spokes and over the wheel to be secured on the other side.

The Thule Sidearm doesn’t come with any locks but it is possible to install them. They’ll need to be purchased separately and expect to purchase 2 if you want to secure the rack to the car and the bike to the rack itself.

Once you have your bike mounted and properly secured, you can drive up to 80 mph and still not have to worry about your bike being ripped off due to the wind drag. 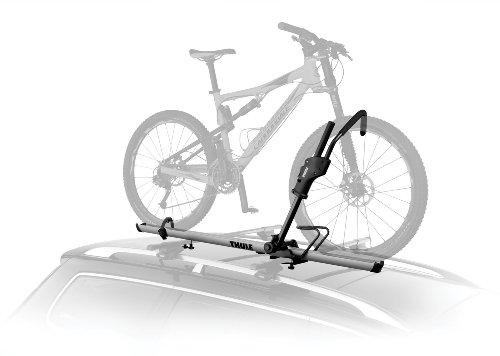 But it’s important that you make sure the ratchet arms are secure though (the front ratchet should be just in front of the front brake caliper on your bike).

Wind noise was acceptable and barely noticeable. You won’t hear it over the radio or your favorite cd playing so that’s always a plus.

Because of the more stable design, most consumers felt more comfortable and secure with this system as opposed to the hook-like arm of the Thule.

You’ll get the same amount of road noise, however.

The Thule Sidearm, as implied by the name, has a front wheel ratchet system that is composed of just a wheel hook.

The hook fits over the front of your bike wheel and is locked into place to secure it. There’s no support or locking mechanism on the other side.

You’ll still get the back ratchet strap to help secure it into place, and surprisingly, the bike won’t budge once everything is set up properly.

The Yakima Frontloader, on the other hand, has two stabilizing bars that will hold the front wheel in place, but there’s a rear ratchet strap

like any other bike rack system, so if you’re worried about your bike flying off the rack at high speeds or bumpy roads, then maybe the Frontloader will give you peace of mind.

The Thule bike rack system is a pain in the butt to install. We suggest finding a detailed YouTube video to help you along because the instructions, while detailed, can be complicated and overwhelming.

As far as time goes, we’d be surprised if you or anyone could have this bike rack ready to go in under 30 minutes.

As far as both bike racks go, neither one comes with locks, so if you intend to secure either rack to your car and/or the bike to the rack, make sure you purchase 2 separate locks.

It comes down to peace of mind.

The Thule Sidearm while secure, doesn’t give the impression of security because of the hook-like design that clamps down onto the front wheel.

There’s nothing on the other side to prevent the bike from toppling over if the front ratchet arm fails except for the rear ratchet strap, but that hasn’t happened to anyone.

It’s more of a “What if” scenario.

The Frontloader has a more stable design that puts people’s minds at rest because of the two ratchet arms and the rear ratchet strap.

Other than that, there’s no differences in quality and construction.

One thing we do want to note is that both the Thule and the Frontloader can only be used with that manufacturer’s roof rack. So don’t expect to install a Thule on a Yakima roof rack or vice versa.