Traveling is already stressful without having to worry about how to strategically pack all of your family’s belongings into one cramped vehicle.

Aside from upgrading to a larger vehicle or renting a small tow trailer, there’s a much cheaper alternative that won’t affect your wallet in the long run and can save you the frustration and hassle of playing Tetris with suitcases and bags.

We won’t go into the specifics of the sizes since the only key differences between all the models is, well, size.

That said, we’ve always suggested going for the next size up whenever you’re in doubt. So if you’re not sure if the medium will hold all those sleeping bags (and a few extras), maybe you should consider the next size up.

We’ll make it easier by listing the sizes and dimensions in a table below as well.

Let’s talk about the similarities first.

Right off the bat, you’ll notice that both the Thule Force and the Yakima Skyboxes have the similar bullet-shaped aeirodynamic design.

This allows air to go around the boxes while you drive, reduce any drag (which could save you some extra gas), and noise that can occur when the wind experiences resistance because of a non-aerodynamic box.

Appearance wise, both have a glossy finish that doesn’t take away from the appearances of your own vehicle, but there’s more to it than just appearances.

Specialized plastic provides a lightweight rooftop box that is both durable and weatherproof so you’ll never have to experience wet suitcases or sleeping bags again. Everything inside will stay dry once the lid has been latched down properly and locked.

Both the Yakima and Thule rooftop car boxes are able to be opened from either side.

So if parking is tight but you still need to access your luggage, you still can.

With your roof rack already installed, compare the installation for each kit:

Installation is done straight out of the box. That means you don’t need any extra tools to get this cargo box installed onto your car. You just open the cargo box, release the levers, and adjust the adjustment knobs.

With all that setup, you lift the box onto your crossbar rack and keep sliding the box until the levers lock into place with your rack.

After you have the box locked in place, adjust the knobs and close the levers to completely secure it into place.

The universal mounts will fit the Yakima Round/Square, Factory, and Aerodynamic crossbars.

The TF has a similar installation process. With this cargo box, you’ll loosen up the knobs inside to release the adjustable clamps.

Once that’s done, lift the cargo box onto the car rack and adjust it onto the rack making sure to align the clamps with the rack.

After you’ve adjusted it where you want it just tighten the knobs and you’re set.

As far as mounts go, the Thule Force will fit most racks including round bars and factory rack systems.

Things We Think Are Neat

How many times have you locked your keys in your car or even had another cargo box you had to bust open because you forgot where you set your keys when you were throwing everything in? 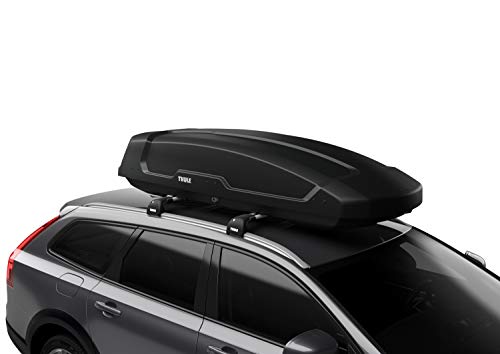 The Yakima Skybox has a locking handle that only opens AND closes with key engaged.

That means in order to lock the box, the key has to remain in the handle until you’re ready to close it.

The Thule Force also has a similar design where you can’t lock the box until everything is latched securely and the key is in the handle.

We talk more about the lock system in the section below under Special Considerations.

This isn’t really a nitpick thing about either of the cargo carriers, but we thought we’d include a friendly reminder to make sure you have a baserack already installed on the car you want to use the cargo box with.

We did notice that most consumers seemed more pleased with the Thule Force with people reporting that the wind drag and noise was barely noticeable if at all (even at speeds up to or past 50mph).

Their gas barely budged from the usual usage rate as well…

The Yakima Skyboxes weren’t so bad in comparison, but users did comment that wind drag and noise was noticeable and could get annoying after some time.

So maybe the Yakima is not ideal where long trips or high speeds are a concern.

As far as the Thule Force go, there were a lot of complaints about how the keyset has a tendency to snap in half. So take that into consideration as well or at least make sure you have a trusted locksmith’s number in your wallet if it does happen.

As pointed out above, both cargo carriers will get the job done while keeping the contents inside secure and safe from the outdoor elements. Our pick for the superior series of boxes however, goes to the Yakima Skybox.

With special attention towards whether or not drag or wind noise is an issue for you, it really just comes down to the size you choose for your car.

In which case, the Yakima Skybox offers more room than the Thule Force Series. Check out the table above to see what we mean.

Design and construction wise, both are on the same level until it comes to the keys.

As mentioned above, the Thule Force has a reputation for keys snapping in half.

Customer service is polite and usually has a new set shipped out right away and some suggestions on how to remove the broken key yourself, but a locksmith can do it just as well, but for a fee.