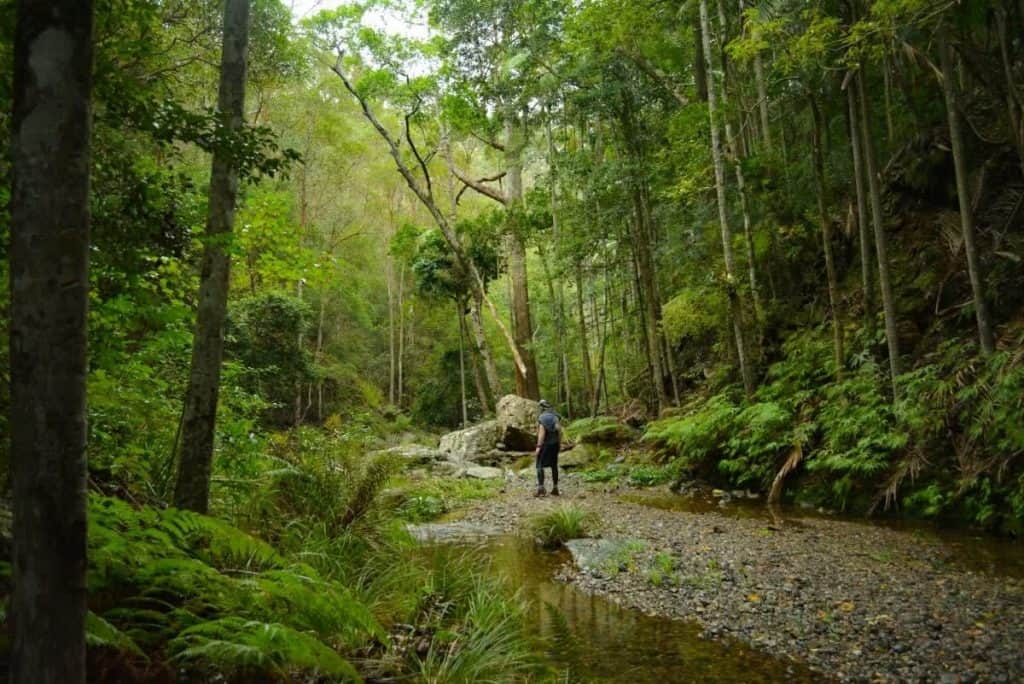 I thought I was in for a lazy day at home on the computer. I’d just finalised a design, and placed an order for a run of same day t-shirt printing for the website, when my buddy Andy gave me a call.

Did I want to go canyoning out at D’Aguilar National Park (about 1.5 hours northwest of Brisbane)?

Well of course I did. Only problem was that I’d just ordered my tees and was due to pick them up at 4:30pm!

How could I say no?

For those who aren’t familiar with it, D’Aguilar National Park is a hilly wonderland full of beautiful creeks, cliffs and canyons. Just driving through the myriad twists and turns of Mount Nebo Road is an adventure in itself. But Andy had picked out a spot for us. Pulling off the road in the tiniest of roadside pitstops, we ditched the cars and started a 30-minute scrub bash through some thickest bush around to get the top of a rarely visited canyon. Lugging ropes, harnesses and climbing gear into this bloody spot was a rough job, and I was silently praying that things would get easier once we were descending the canyon.

‘This is the easy bit,’ Andy informs me, ‘getting out from the bottom of the canyon really sucks!’

At this stage it’s around 11am and I’m thinking there’s no chance of making it back to town in time to grab my tees by 4:30pm! Soon enough we start our descent, which turned out to be a very hairy combination of abseiling, swimming, jumping and climbing which constantly made me think I would never make it out of there.

We reached what Andy told me was the ‘final drop’. Standing in a rocky canyon so narrow I could simultaneously touch both sides and looking down at a huge drop to a deep pool below, I started to wonder what we were going to anchor the ropes to for this abseil.

‘There’s not really any suitable anchors for this one,’ Andy says ‘we just have to jump it.’

‘What?! It must be at least 12 bloody metres.’ Was something like what I replied.

‘At least’ he says, as he promptly leaps off and plummets to the water below, landing with an almighty splash.

At this point there is absolutely no other option. I can’t go back the way we came, can’t climb out the side of the steep-walled canyon, and apparently can’t descend with the use of ropes. I try to build up the courage several times to follow Andy’s leap and don’t seem to be able to grasp it. I try looking away from the drop, then quickly turning and trying to do it. No luck.

After about 15 minutes of this and a torrent of abuse from below, it’s a look at the clock which convinces me to stop stuffing about and jump!

A quick swim out, a gruelling climb through steep, scrubby terrain and a winding drive back to Brissy got us back just before 4 and I was able to pick up my sweet new tees!