A cook stove is an indispensable part of your camping collection. These stoves are small enough to pack with you wherever you go, but they have enough power to feed a hungry crowd. Whether you enjoy tailgating or camping, a cook stove is a must-have!

There are many cook stove options, but the Coleman Triton and the Camp Chef Everest cook stoves are two of the most popular stoves on the market.

Check out each stove’s features to help you make the right decision purchase decision.

Camp Chef Everest 2 burner stove in use during winter!

The Coleman Triton features wind block panels that keep burners from blowing out. If you’ve ever tried to use an outdoor stove in the wind, you will appreciate this feature!

This stove is angled at the top, and it has a larger area of coverage than the Camp Chef Everest. If you’re expecting a big crowd, this is a definite benefit. You can adjust the burners for various pan sizes, as well. 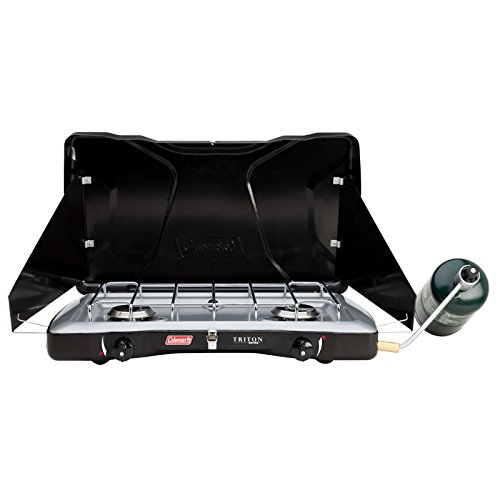 The Coleman Triton features Perfect Flow technology, which helps the stove to cook consistently, even in less-than-ideal conditions.

Additionally, it utilizes PerfectHeat technology, a system that uses less fuel while maintaining the same level of excellence you expect. 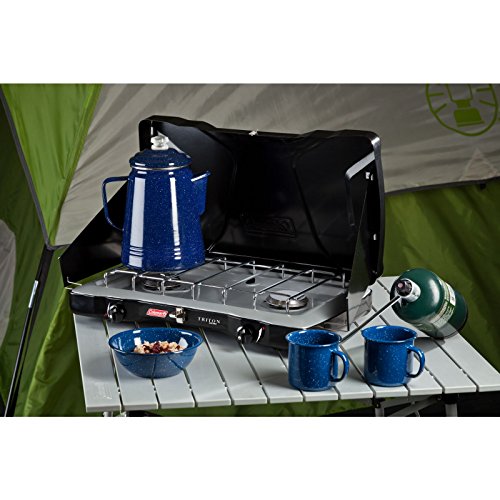 Camp Chef Everest may not feature special names for its technology, but it is also designed to cook well in harsh weather conditions.

The Triton puts out 22,000 total BTUs. It cooks food using a propane adapter that screws on that attaches to the side.

The Camp Chef Everest puts out a total of 40,000 BTUs, nearly twice as much as the Triton. It can run from a large propane tank or a one-pound tank, making it adaptable to multiple situations.

Both stoves can be used without matches. The Coleman Triton features an Instastart push-button ignition. 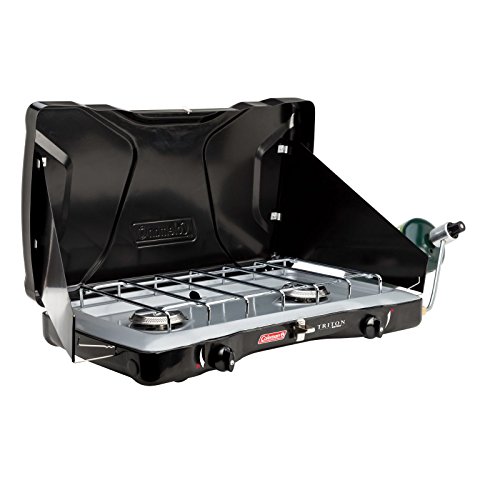 You can adjust the heat separately for each burner, which is ideal if you want to cook two separate dishes at once.

The Camp Chef Everest can also be ignited with a button. It uses piezo ignitors, which are safer than matches.

The Coleman Triton weighs 11.2 pounds, making it lighter than other similar products. The Camp Chef Everest weighs a bit more at 13.6 pounds.

The Coleman Triton tends to be slightly less expensive than the Camp Chef Everest stove. The costs are typically similar, so price probably won’t be your deciding factor when choosing between the two stoves.

The Camp Chef Everest stove has a carry handle and a stainless drip tray. Both of these features give it a user-friendly edge. The built-in grills have a non-stick coating for easy clean-up.

The Triton has two brass burners, plus a nonstick grill. There is room in the stove to store a griddle, if you choose to bring one. The stove runs off a one-pound cylinder, but you can use a hose to fuel it with a larger tank.

Some users have reported that the Coleman Triton uses fuel quickly. Others report that the burners are difficult to adjust to the right temperature.

Some users have found the Camp Chef Everest stove to be fragile. It breaks or dents if it is not transported carefully.

A few users have reported that their stove arrived dented or with flaky paint. There are also complaints that the piezo lighter can break quickly.

Both of these stoves are high-quality yet affordable, and both have overwhelmingly positive reviews. Each of these cook stoves offers you the option to cook great meals outdoors.

However, the Coleman Triton is less expensive and offers a better warranty. It is also lighter, so it’s easier to take camping.

Additionally, its wind flaps are better designed. You’ll be happy with either of these stoves, but we recommend the Coleman Triton!

It is also lighter, meaning it’s easier to take along backpacking or camping when any extra weight matters, and its wind flaps are better-designed.