Blundstone is an Australian company that makes versatile, stylish boots. Not only can the boots be worn during formal occasions, but they can also be worn for hiking or in an industrial workplace. In addition to looking great and providing comfortable support, they protect your feet from potential injury and the elements.

Two available models are the original 500 and the upgraded 550. We’ve laid out what you need to know about each.

The Blundstone 500 is the original series of boots that has made Blundstone a classic manufacturer. The aesthetic appeal is versatile enough that the boots can be worn for both formal and informal events. On top of being stylish, the boots offer superior protection for your feet and are durable enough to stand the test of time. 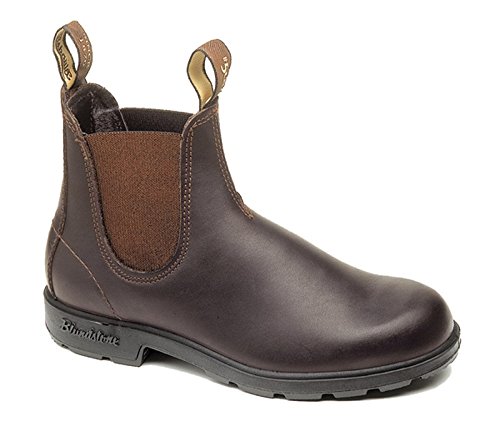 The boots come with an included Cambrelle footbed. This footbed offers an additional layer of cushioning at the midsole, which is ideal for those who prefer to have extra support under their feet. In addition, it wicks away moisture, so the inside of the boots stays warm and dry even if you’re sweating or walking through wet conditions. Should you prefer a rougher feel, you can remove the footbed.

Another feature of the boots is the classic shock prevention system. When compared to boots that don’t have this technology, the design reduced the shock of high impacts by a whopping thirty-three percent.

That means that athletes and people who suffer front joint pain will both benefit. The upper fuses seamlessly to the outsole, which means there’s less potential for tearing or fraying. Meanwhile, the outsole itself has dual density layering to provide extra support and soften your stride.

Though this boot retains all the appeal of the original design, the Blundstone 500 has gone through a few upgrades and changes over the years. Now the boots boast convenient pull-loops that make it easy to pull them on and off, along with a molded and reinforced heel that offers better traction and stability.

The outside of the sole is a rubber TPU coating that’s resistant to both oil and acid. It has enough traction and grip to take you across tough terrain, but it’s also durable enough not to wear down fast. The other layer is a softer level of polyurethane, which increases the comfort and support for your foot.

The Super 550 is a pricier option than the 500, and it’s advertised as being a marked improvement over the original model. The main question is whether the improvements are dramatic enough to warrant a purchase. 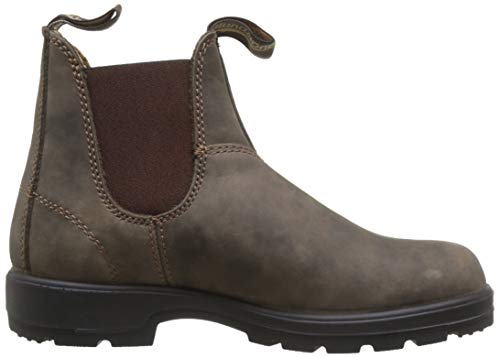 These boots have been engineered with an upgraded shock absorption system. The heels absorb shock every time they hit the ground, and the toes have enough flexibility to offer a unique grip. Meanwhile, the soles generate superior traction on nearly any surface. 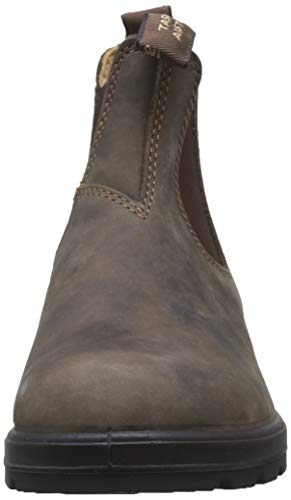 The leather uppers of this boot have been treated with a WeatherSealed coating that makes them water resistant. While the boots aren’t fully waterproof, they will stay relatively dry if you’re out in the rain or splash through a shallow puddle. Despite the waterproof coating, the boots are breathable enough to keep fresh air flowing around your feet.

Another ideal feature is the steel shanks built into the outsole. These let you dig your feet into the ground and create increased stability and strength. The elastic components snap back into shape no matter how often they’re stretched. Where the boot components were stitched together, the seams use reinforced stitching that was created by two needles and thread that can withstand high tension. 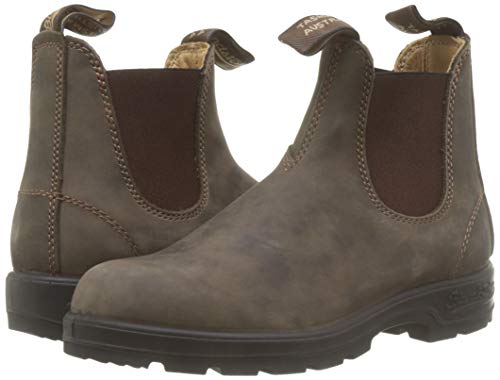 The midsole has also been upgraded when compared to the original 500. The company’s engineers have layered Poron XRD cushioning into the heel strike zones in the midsole. These absorb even more shock than the original design did.

When compared to the 500, the 550 boots have better shock absorption thanks to the combination of the shock absorption system and strategically placed foam. The 550 also has a higher degree of water resistance since the leather upper has been treated with a water repelling coating. Though it isn’t fully waterproof, it is significantly more comfortable.

The outsoles have also received some improvements. The 500 and 550 both use dual layering to provide durability and support combined with comfort and cushioning. But the 550 has the addition of steel shanks, which dig into the ground during each stride and help prevent sliding.

Both the Blundstone 500 and 550 are high quality boots that combine durability, style, and comfort. The 550 takes all the features of the 500 and adds some additional technological improvements. However, this comes at a bit of a price hike.

The 500 boots are an excellent choice regardless of how often you’ll wear them. They’re versatile enough for use in nearly any occasion, and you can also use them for athletic purposes. The engineers have taken care to create a comfortable and durable shoe that absorbs shock and reduces the pain of wear. If you’re a more casual shoe enthusiast and shopping on a budget, these are a great pick.

For those who are more passionate about boots and expect to get more heavy-duty use out of them, the 550 is worth taking into consideration. These boots have spikes on the outsoles for increased traction and stability, an improved shock absorption factor, and a water resistant coating on the upper. If you plan to use the boots for hiking, mountaineering, or other adventuring, these upgrades make a huge difference.