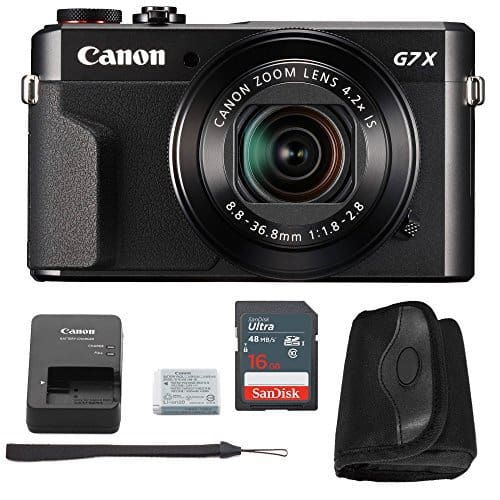 In today’s modern world, some people may wonder why buying a point-and-shoot camera is worthwhile.

After all, smartphone cameras essentially function like a point-and-shoot camera, right?

But physical cameras have some advantages that smartphones can’t hope to rival.

First, the quality of the images in smartphones isn’t always the best. A camera with a high-quality sensor can give you images with much greater detail and better light balance than a smartphone camera

In addition, large format cameras give you a greater amount of control over your focus and exposure.

For photographers who are used to the tactile sensation of adjusting a camera focus, the electronic settings of a smartphone just can’t compete.

If you want a camera that can capture great images regardless of your photography prowess, a good choice is an advanced point-and-shoot model.

These models have enough settings to let you shoot in a wide variety of settings, but they still have the simplicity of point-and-shoot technology.

These cameras have the capacity to capture high quality images, but they also have accessible and customizable controls that you can use no matter your level of expertise.

They’re also more portable and inconspicuous than many larger cameras, since you’re not dealing with the bulk that comes from additional lenses.

We’ve put together a list of our top picks for advanced aim-and-shoot cameras.

Canon has recently begun expanding the PowerShot G series. Each camera in the series is an advanced but compact model.

The Mark II is sleekly designed and moderately priced, placed right in the middle of the lineup. It is one of the best canon PowerShot G series cameras.

This camera has the capacity to record video, along with a versatile zoom lens. You can take detailed still shots by using the 20.1 MP sensor to shoot up to 8 frames per second. Videos are recorded in full 1080P HD.

You can also utilize the expanded sensitivity range to work in multiple different lighting conditions. No more worrying about picture quality in low light, or having bright sunlight wash out your colors!

The lens has a range of 24 to 100 millimeters, meaning that it can take both wide-angle and short shots. The control ring surrounding the barrel of the lens helps you adjust the shooting settings in a tactile way.

The camera comes with a 3.0-inch touchscreen. Additional WiFi capabilities let you remotely control the camera with your smartphone. You can also share imagery in real time with a WiFi connection.

This digital camera is another great offering in the PowerShot series from Canon. The features are similar to those found with the Mark II.

However, the overall form is a little thinner. There’s also a shorter zoom range, with a lens that can only handle 28 to 80 millimeters.

The pictures are slightly more detailed due to the 20.2 MP sensor. There’s also an image processor compatible with Canon’s unique HS system.

This system reduces the sensitivity and noise when you take your pictures. It also allows for continuous shots at 6 frames per second. You can take videos with full 1080P HD quality.

The intelligent IS technology minimizes camera shaking when you shoot stills. There’s also a 3.0-inch touchscreen that lets you intuitively control playback and settings. Like the Mark II, you also get built-in WiFi capabilities.

This camera is a slightly different offering. Rather than being marketed toward photographers, this rugged design is made for adventurers.

The image capabilities are a little less advanced than with the Canon cameras, but still extremely worthwhile.

The sensor can capture images in 16 MP at up to 5 frames per second. There’s also the capability of full 1080P HD video shooting. But what really sets the camera apart is the hardiness of the design.

If you’re an adventurer who travels in more perilous conditions, or you like to shoot while participating in action sports, this camera might be a great choice for you.

It’s also a good choice for people who are clumsy enough to want a robust option.

The camera’s lens has a zoom range of 25 to 100 millimeters. You also get access to a 3.0-inch touch screen, along with built-in GPS and WiFi capabilities. There’s even an electronic compass.

This is another sleek, pocket-sized model that’s made for traveling photographers. The camera has a 20.1 MP sensor along with a Venus Engine processor that greatly increases overall image sensitivity.

While the camera doesn’t have the same HD video capabilities as some other options, videographers still have access to 4K shooting in 24p or 30p quality. You can shoot 8 MP stills at a rate of 30 frames per second.

No matter whether your subjects are close or far away, this camera has you covered. The lens ranges from 25 to 250 millimeters. In addition, the lens has a stabilizing system that helps minimize camera shaking.

This is one of the more popular models on the market. It’s one of many cameras in the RX100 series from Sony. Over the years, cameras in this series have received multiple upgrades to make it ideal for both videographers and photographers.

The camera has a 20.1 MP sensor. When combined with the BIONZ X processor, you can record video in 4K HD. You can also take high quality slow motion video in HD with maximum speeds of 960 frames per second.

With still shooting, you can get up to 16 frames per second. The noise-cancelling sensitivity also reaches high levels. The lens gives you a range of 24 to 70 millimeters, and additional technology minimizes camera shaking.

As far as physical appearance goes, this camera has a 3.0-inch touchscreen along with an electronic viewfinder. You also get access to built-in WiFi.

When picking out the best point-and-shoot camera, it’s hard to beat the G7 X Mark II. This camera has enough adjustability to please photographers of any skill level, and the built-in WiFi allows a greater range of control.

For adventurers looking for a more rugged camera, the Olympus Stylus is a great option. It can stand up to a lot of the wear and tear from adventuring. The picture quality will be a little lower, though.

The Panasonic Lumix is hard to beat if you want a camera with huge FPS capabilities. When you use an electronic shutter, this camera can capture a whopping 50 FPS. It also has the largest zoom range, with a lens that ranges from 25 to 250 millimeters.