Arcteryx is a trusted manufacturer of winter apparel and outdoor gear. For those living in the mountains, two of the most popular options are the Alpha and Beta jackets. Though they may seem similar at a glance, there are a few important differences between the jackets.

The Alpha jacket is specifically designed to offer warmth and protection to those engaging in alpine activities like mountaineering, skiing, and living at high altitudes. Since the jacket is made for use in cold climates, it includes a high and hooded collar that protects your neck.

The jacket has an attached hood called a StormHood. It doesn’t detach, but that just means that the hood is always available when you need it. Since weather patterns change quickly in the mountains, the hood helps to cover your head and preserve your body heat when the unexpected happens. If you’re a fan of mountain biking, you’ll be pleased to know that the hood is compatible with helmets.

The fit of the jacket is athletic, meaning that it will work best for individuals with a traditionally athletic or lean profile. As such, it’s less bulky than a regularly fitting jacket would be. This gives the jacket an ergonomic cut that reduces wind resistance and makes movement easier.

The jacket includes sleeve cuffs that can be adjusted through Velcro tabs. When the weather is cold, you can close them to prevent heat loss. Conversely, if you’re feeling a little too warm, you can loosen the cuffs and release the air inside the jacket.

Many jackets designed for cold weather don’t have very good ventilation because they focus more on insulation. The Alpha has the best of both worlds, though. The main body of the jacket uses insulation to keep your body heat inside, but there have been strategically placed vents added to the underarms. These quickly vent the heat that your body generates during athletic activities.

Another adjustable feature is the hem. You can loosen or tighten it with the jacket’s inside drawstrings, which is another way of venting or retaining heat as needed. The design incorporates an inside pocket that’s capable of storing your keys, phone, valuables, and small belongings.

Alpha is crafted from Gore-Tex fabric. Gore-Tex has become industry standard across multiple companies because of the fabric’s high durability, breathability, and weather resistance. The outside components of the jacket have also been reinforced with stronger Gore-Tex Pro fabric.

In addition to having a traditional waterproof coating, the seams of the Alpha jacket are taped to prevent drafts from leaking in. The overall result is a windproof and waterproof jacket.

While the Alpha jacket is made specifically for those in the mountains, the Beta jacket was created to be much more versatile. The jacket’s design serves a variety of purposes and can hold up against multiple weather conditions. The aesthetic style uses minimalist vibes, so you can choose from solid colors rather than flashy patterns. 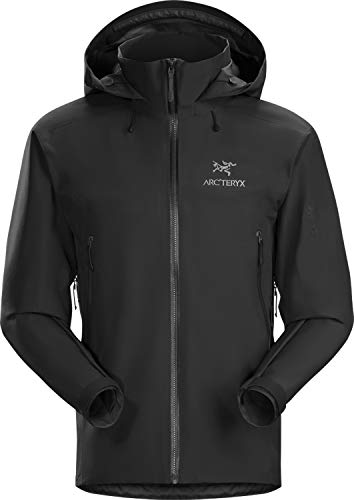 The Beta jacket’s hood is called a DropHood. Rather than being made for insulation, it’s designed to protect you against the rain. The hood is also made to conform to the head and stay put even in high wind conditions. Like the Alpha, the Beta’s hood is compatible with bike helmets.

The jacket also boasts adjustable sleeve cuffs, though they use fastening tabs rather than Velcro. They still provide the same level of heat regulation. Also like the Alpha, the Beta jacket uses an athletic fit. It does tend to be more flexible than the Alpha, though, since it’s an athletic jacket that’s meant to move with the motion of your body.

The elbows have articulated patterning that allows the joints to be significantly more flexible. In addition, the underarms don’t have any gussets, which also increases flexibility. Gore-Tex jackets are sometimes stiff due to the high level of weatherproofing and waterproofing, but the construction of the Beta minimizes this effect.

The Beta comes with two hand pockets at the front of the jacket. They tend to be large enough to carry the contents of your wallet and a few other belongings. One advantage is that the pockets have watertight zippers, so you can keep your carried items dry even in wet conditions. With that said, if you’re worried about moisture damage, items will be safest in the jacket’s internal pocket.

While the Alpha and Beta jackets have similar amounts of pocket space, the Beta design puts the pockets in a different place. They’re higher up than jacket pockets usually are. This allows you to wear tactical belts, fanny packs, harnesses, and hiking gear strapped to your waist if you’re going on outdoor adventures.

The Alpha and Beta jackets  from Arcteryx both come with very similar designs. They offer useful features, aesthetic appeal, an athletic fit, and a strong overall performance. Either of the jackets can suit you in the winter months. The biggest thing to keep in mind is the versatility.

The Alpha jacket was made for people who live or spend a lot of time in the mountains. It focuses more heavily on protection features like insulation, weatherproofing, and a snug hood. If you live in an area with unpredictable weather patterns, the Alpha jacket is an ideal means of staying safe.

The Beta jacket is very similar, but the design is made more for versatile athletic wear than temperature protection. There are strategically placed pockets that let you carry your belongings without interfering with any harnesses or belts you might need. The temperature regulation factors let you wear the jacket in multiple different climates.