All Hazards Nitro Vs Rush 12

We have to admit that reviewing these two backpacks was actually exciting.

On one hand, we have a backpack that we’d almost consider to be the swiss knife of the backpacks, and then there was the Rush 12, which appeared to be basic but actually impressed us in the end.

If you’ve been on the lookout for the perfect pack that has your back whether you need an EDC or a hiking pack, check out our comparison of both the Hazards Nitro and Rush 12 backpacks.

The Hazards Nitro is the backpack that comes to mind when we think about backpacks that can handle anything you throw at it, whether you need it for day hiking trips, a carry on bag, or wilderness expeditions. 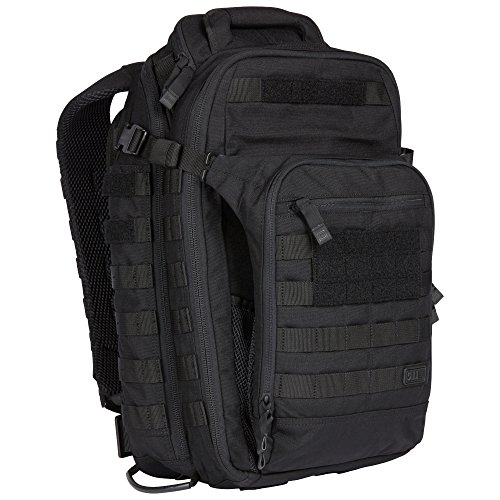 Right off the bat, we were impressed with how durable this pack is.

It can be dropped, beaten, stomped on- and still look like it did the day you first got it.

Of course, that’s because of the 1050 denier nylon which helps the pack maintain its rigidness while helping to wick any water away.

The Rush 12 is equally at home with being a wilderness pack, a hunting pack or even an EDC (everyday carry) pack.

You’ll get the same1050 denier nylon ensures that the pack will keep its shape, resist abrasions, tearing, all the while being fairly waterproof.

You can’t really beat the Hazards Nitro when it comes to comfort.

The entire pack was well thought out and organized well, but that’s not all. 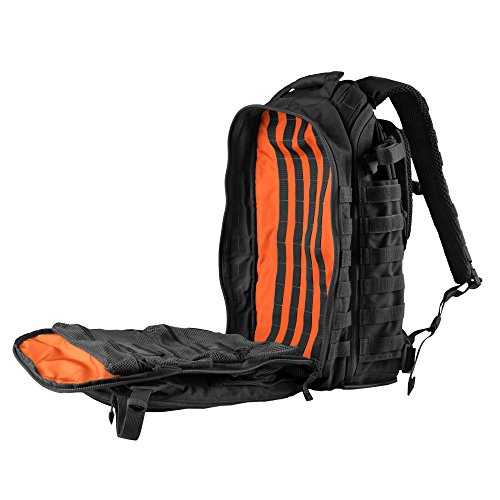 The sternum strap is easily adjusted and won’t cut into your chest. But if you’re not happy where it sits, the MOLLE strapping on the shoulder straps allow you to adjust the sternum strap (move it up or down depending on your preference).

There’s plenty of MOLLE strapping, so you can attach any extra gear there as well.

The shoulder straps are well padded so they don’t cut into your shoulders.

There is a quick release option towards the bottom of the straps that allow you to immediately dump the pack if you were to get caught up on something.

One thing we noticed that we want to point out is that although the pack has some attachments that would allow you to attach a belly strap, the pack itself doesn’t come with a belly strap so you’ll need to purchase one separately.

Breathability is also a plus.

The shoulder straps and the backrest are well cushioned and allow airflow so sweating or having a sweaty pack rubbing against your skin really isn’t a concern here. 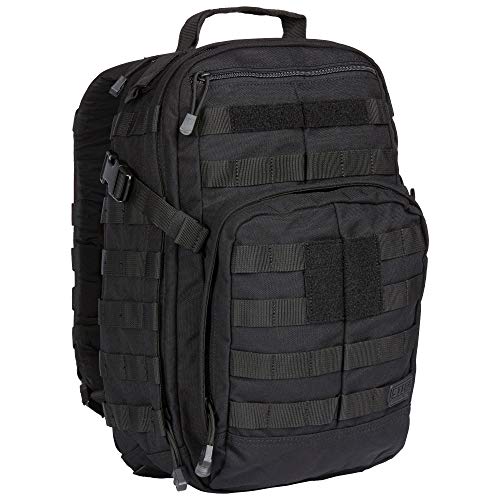 The sternum strap is pretty basic and can be clipped into place, but there is no emergency release setup, unlike the Hazard Nitro.

The backrest has cushioned pads on each of the four sides of the pack to kinda give your back some cushioning against the pack.
But we’re just not sure it would be comfortable hauling for long distances.

We would also like to point out that it also doesn’t have a belly strap but you can purchase one separately and attach it with ease.

We think every pack should come with the MOLLE system. If you don’t know what that is, it’s a strap system that is usually affixed to the front of a pack and sometimes the sides. This gives any pack the ability to be modified to suit the user since you can buy extra accessories that can attach or hang from the MOLLE. 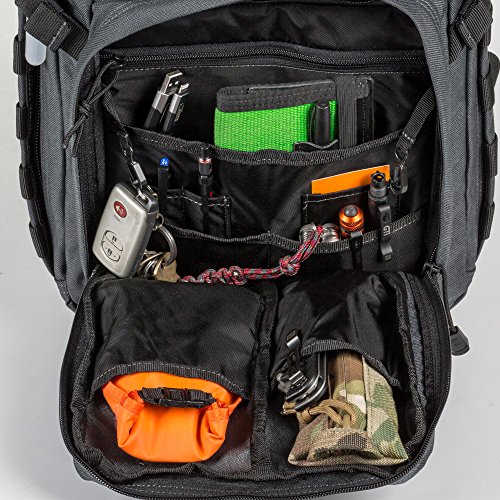 The Nitro pack has the perfect setup, with MOLLE setup on both the sides of the pack and the front of the pack. This gives you the perfect opportunity to attach additional accessories like first aid kits, water bottle holders, etc- to the pack without having to waste precious pocket space.

On the back panel, there’s vertical MOLLE setup laid across a fluorescent orange backing.

This makes it perfect to attach MOLLE compatible accessories which makes it possible to toss in safety holsters for concealed carry, or whatever else.

The Rush 12 pack has almost the same MOLLE/compression strap setup with the difference being configurations and how they’re placed.

One difference between this pack and the Nitro is the fact that neither of the pockets is removable so keep that in mind when deciding between the two.

Verdict – All Hazards Nitro Vs Rush 12

Our choice is the All Hazards Nitro Pack.

The Hazards Nitro doesn’t come with a belly strap which is surprising considering that it’s almost standard for packs today.

There is no emergency release on the shoulder straps for the Rush 12, and it also doesn’t have a belly strap. 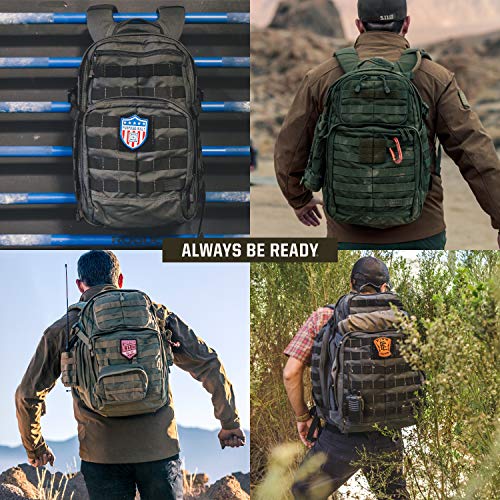 We absolutely love the Hazards Nitro pack for everyday use as well as hiking/camping. Compared to the Rush 12 pack, it seems better built and like it would be more comfortable for longer hauls.

There also seems to be more pocket configurations and some of the pouches are removable but can be reattached with the velcro packing.

The Rush 12 isn’t a bad pack necessarily, we just feel like it was pretty basic compared to the other pack.

But if you need a simple pack without all the bells and whistles, well then this pack will work perfectly for you.